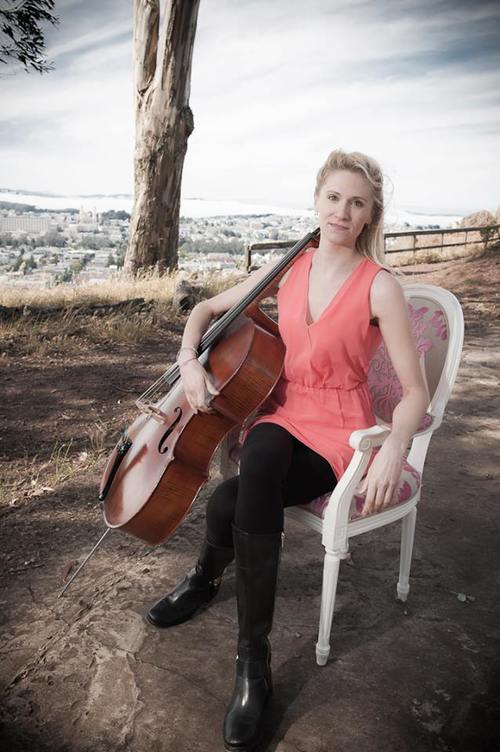 An accomplished soloist and chamber musician, cellist Anne Suda enjoys national and international performance opportunities. Anne has been praised for bringing a fresh and contemporary sound to her repertoire, with the Northwest Reverb writing of her interpretation of the Debussy Cello Sonata,

“Cellist Anne Suda read so much contrast into the score, intermittently I felt I wasn’t hearing Debussy at all, but discovering his lost contemporary genius…it was the freshest I’ve heard.”

This fall Anne served as Artist-in-Residence at Western Illinois University where she gave a solo recital and master class for university cellists. Anne also joined forces with Aleron Trio violinist Solenn Seguillon to perform the Brahms Double Concerto with the Knox-Galesburg Symphony, an orchestra with which Anne has also performed the Dvorak Concerto and Tchaikovsky’s Rococo Variations. Anne performs the Rococo Variations this February with the American Philharmonic in Santa Rosa.

As cellist of the Aleron Trio, Anne has performed on critically acclaimed tours of France and recently completed a residency with the Southeast Iowa Symphony performing Beethoven’sTriple Concerto and giving school and community outreach presentations. Aleron Trio will again perform the Triple Concerto with the Venice Symphony in Florida. This season Aleron Trio performed in the Yehudi Menuhin Festival led by the Alexander String Quartet and performed in a master class with the Juilliard String Quartet.

Anne has performed Schoenberg’s Pierrot lunaire throughout the country at venues including Kennedy Center with chamber group Nonsemble 6. Performed memorized, Anne interacts with other members of the ensemble to present a staged performance of this monumental 20th Century work. Anne performs the work again this spring at UC Santa Cruz, Stanford and Salle Pianos in San Francisco.

Anne received her Bachelor of Music Degree from Vanderbilt University where she double majored in English Literature and her Master of Music Degree at the San Francisco Conservatory as a student of Jennifer Culp. Anne also studied in Australia at the Sydney Conservatorium, where she served as principal cellist of the orchestra. Anne began her cello study with her mother Carolyn Suda at age four.